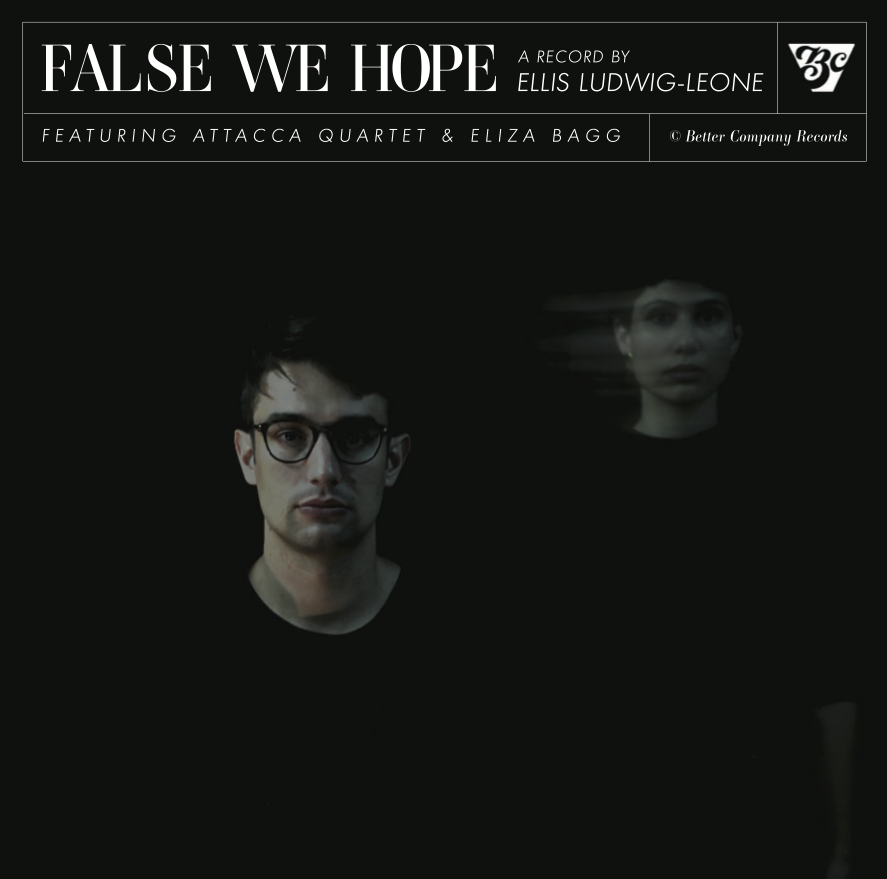 False We Hope is the first album of concert works by composer Ellis Ludwig-Leone. Recorded by the Grammy-winning Attacca Quartet and vocalist Eliza Bagg (Roomful of Teeth), with Ludwig-Leone on piano and synthesizer, its movements flicker through themes of hope and loss, connection and isolation: a prayer book for the nonbeliever. Featuring a libretto by MacArthur recipient and Pulitzer finalist Karen Russell (Swamplandia!) and poet Carey McHugh, False We Hope is an attempt for ritual and connection in the face of cosmic indifference and the white noise of isolation.

Comprised of two larger works: the song cycle False We Hope and the string quartet Speech after the Removal of the Larynx, the album’s musical and narrative elements echo back and forth like a seance, mirroring the human desire for connection and the gnarled, sometimes terrifying response of the presence on the other side. For Ludwig-Leone, known as the creative force behind celebrated indie band San Fermin, False We Hope is both an expansion and departure from the aesthetic and musical language that launched him to success as a bandleader. The music on False We Hope was written in solitude, in a moment of disquiet and fear. This new community of collaborators, assembled to bring the deeply relevant themes of these works to life, unflinchingly presents an expression of hope in an uncertain world. 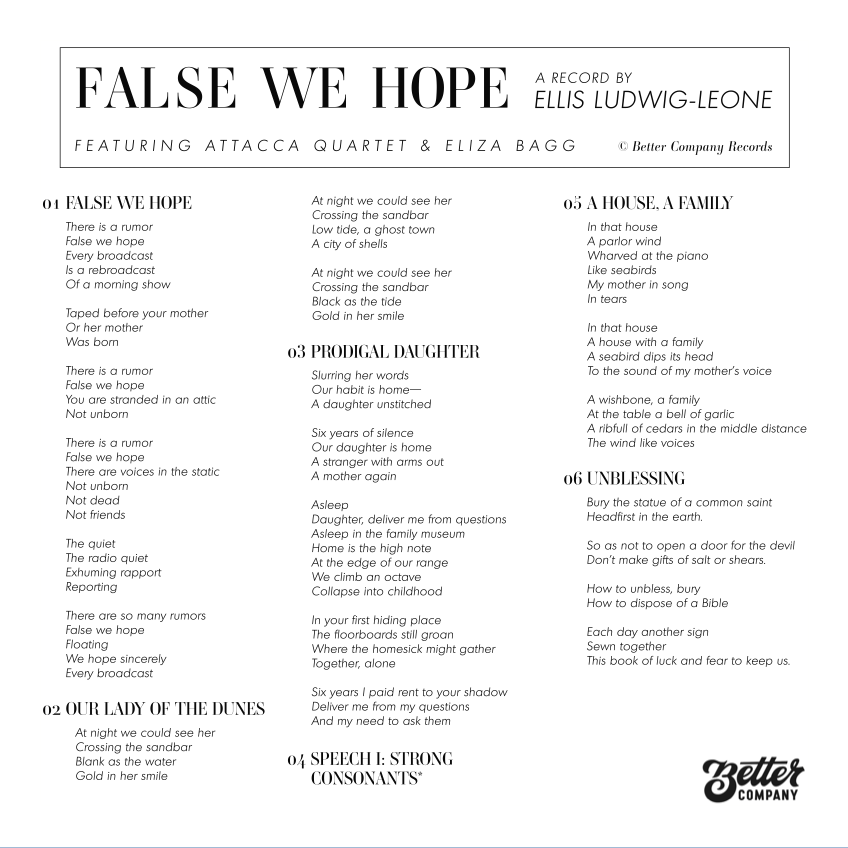 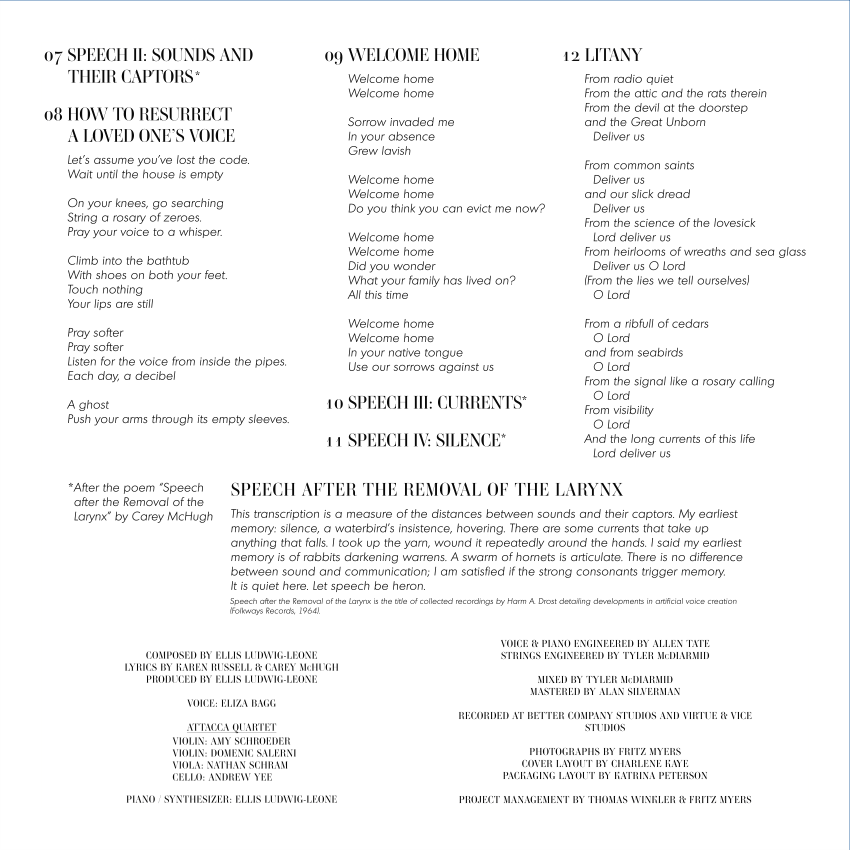 Ellis Ludwig-Leone (b. 1989) is a composer whose music combines lush, naturalistic textures with moments of thorny complexity. Influenced by a lifelong love of storytelling and myth, his music is distinguished by its narrative sweep and attention to subtle changes in emotional valence. Moments of clarity quickly swirl into murk; lyrical melodies twist into gnarled roots. Lauded by The New Yorker’s Jia Tolentino for his “knack for simultaneously expressing beauty and crisis,” Ludwig-Leone’s music exists in the fine margins between euphoria and dread.

Having come to international attention as the songwriter behind the celebrated indie band San Fermin, Ludwig-Leone has spent the greater part of the last decade balancing his work as a songwriter with a robust career as a composer of concert works written for many of today’s contemporary classical luminaries.

False We Hope, his first album of recorded concert works (out on Ludwig-Leone’s Better Company Records in early 2023), is an inaugural view for many into the composer’s singular imagination and the elements that shape his musical world: thickets of bristly strings that coalesce into glowing triads; ghostly voices that curl in and out of harmonies always pivoting just out of reach; wispy melodies drifting over haunted fugues. Performed by frequent collaborators Eliza Bagg (Roomful of Teeth) and the Grammy-winning Attacca Quartet, and featuring original lyrics from author Karen Russell (Swamplandia!) and poet Carey McHugh (American Gramophone), False We Hope is a meditation on faith and family, the ghostly origins of language, and the lonely vigils people keep, together and alone. The piece premiered in spring 2022 at the acclaimed Big Ears Festival, to be followed by a worldwide release and subsequent tour in 2023.

Later in the 2022-23 season, Ludwig-Leone’s first opera, The Night Falls, with a libretto by Ludwig-Leone and Russell, and direction and choreography from Troy Schumacher (New York City Ballet), will premiere at Peak Performances @ Montclair State University. This season will also see the premiere of Daphne, a musical drama for the Brooklyn Youth Chorus with a libretto by Russell; the premiere and subsequent European tour of Past Life for the Dutch harpist Lavinia Meijer and American violist Nadia Sirota; and the premiere of The Order of Things, a new work for choreographer Danielle Rowe and the Grand Rapids Ballet.

Together with his bandmate Allen Tate, Ludwig-Leone is a founding partner of Better Company Records, a Brooklyn-based label with an emphasis on collaboration. Recently, the label released San Fermin’s In This House, a collaborative album that featured contributions from Attacca Quartet, Lisel, Nico Muhly, Sorcha Richardson, Thao, The Districts, Wild Pink, and Wye Oak.

After graduating from Yale University where he studied with Andrew Norman, Ted Hearne, and Kathryn Alexander, Ludwig-Leone worked as a musical assistant for composer Nico Muhly. Born in Rhode Island and raised in rural Massachusetts, he currently lives in Brooklyn.

FALSE WE HOPE is available for booking as an evening length piece.  Orchestration is string quartet, piano, synthesizer, and vocalist.  A stage plot with detailed tech requirements can be downloaded here. 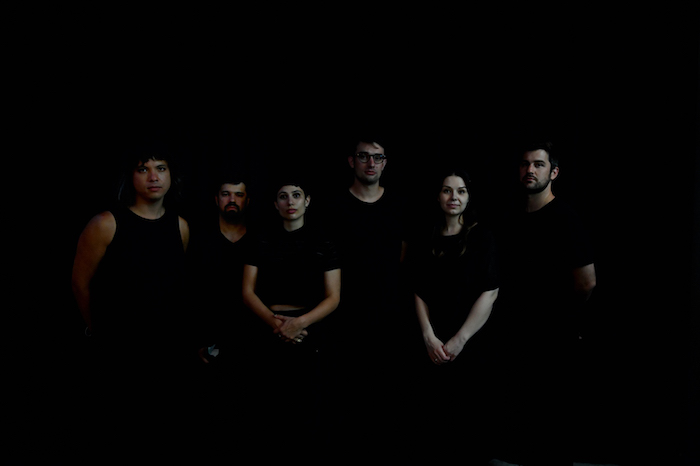